Providing Quality Education for a Diverse Set of Students

While Key West and the Florida Keys see their fair share of tourists and visitors every year, the Monroe County School District is focused on meeting the educational needs of the 8,700 students who call the area their home. With three elementary schools, four K-8 schools, three high schools, and six public charter schools, the district operates 16 institutions committed to providing a quality education for a diverse set of students.

As the Director of Instructional Services for MCSD, Joy Nulisch understands the important role technology can play in the educational process. During her tenure, she has worked with district leadership and teachers to incorporate technology into classrooms.

“Like many schools, we started with the traditional whiteboard technology,” she shared. “That was a decision I’ve regretted ever since.” As teachers shared their frustrations with the whiteboard systems’ limitations, Nulisch realized it was time to make a change. 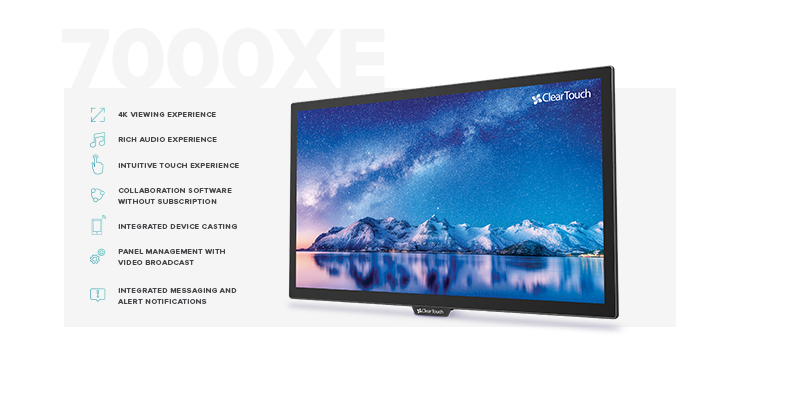 While attending a large educational conference in 2015, Nulisch saw Clear Touch interactive panels in action for the first time. “I was walking through the exhibition hall, and the Clear Touch booth caught my eye. They were conducting a panel demonstration, and I was immediately impressed!”

Based on the initial demo and several subsequent conversations with the Clear Touch team, Nulisch decided to add several interactive panels to classrooms in the Monroe County high schools.

After hearing overwhelmingly positive feedback from teachers regarding the experience with Clear Touch products, Nulisch knew it was time to incorporate interactive panels throughout the district. “After all the issues we had with our previous projector and whiteboard systems, we decided to introduce panels.” She added, “But before we made our final decision, we wanted to test a variety of interactive panels.”

To ensure a thorough comparison, the MCSD team obtained interactive panels from Clear Touch and two other competitors, placed the panels in several schools, and conducted town-hall-style sessions where teachers could interact with them in a classroom setting. “We put them in the different schools and let the teachers use the panels for a couple of weeks,” Nulisch recalled. “Then we all gathered to review, and the teachers told us what they liked about it. When it was all said and done, Clear Touch was the unanimous choice.”

As teachers shared their preferences, two factors stood out: display clarity and ease of use. When the screens were set up side-by-side-by-side, the Clear Touch images appeared more crisp and vibrant. From a usability standpoint, teachers reported that the Clear Touch panels’ intuitive controls allowed them to access their lessons quickly, and the built-in PC allowed multiple applications to work seamlessly together.

The district purchased 328 panels with convertible stands for their K-8 schools based on the positive teacher reviews. From there, they added additional Clear Touch panels to every classroom in the district, giving them a total of 700 panels throughout the district.

“Once we put the Clear Touch panels into the classrooms, they became the go-to device,” Nulisch shared. “From the morning announcements until the bell rings at three in the afternoon, teachers are using them as part of their instruction.” She continued, “Clear Touch knows the K-12 environment so well. They’ve designed their panels to work with devices ranging from Chromebooks to iPads, and that makes it easy for students and teachers to connect and interact.”

While Nulisch has been impressed with Clear Touch from her first introduction to the products, she is quick to point out that the teachers have been just as enthusiastic. When asked to summarize how they feel about the Clear Touch interactive panel in their classroom, one teacher responded, “School days can be long, crazy, and stressful, but the Clear Touch panel is my serenity.”

Another teacher commented on the positive impact the panel has had on their classroom. “I love my Clear Touch! It is the focal point of my lessons. I enjoy the fact that it’s mobile, and I actually shifted the layout of my whole classroom by 90 degrees to better utilize my whiteboard space, something I could not do before with the old projector system. At first, I was scared to try something new. But after I realized how intuitive and easy it is to use the Clear Touch panel and software, I made sure I spread the word to the other teachers.”

By incorporating Clear Touch interactive panels into their instruction over the last few years, MCSD teachers were able to navigate the sudden shift to distance learning that happened as a result of the COVID-19 crisis. Students and teachers were already used to connecting with their classwork digitally, so the transition to online learning was less disruptive due to everyone’s familiarity with digital interaction.

As the 2020-21 school year began with a hybrid educational model of online and in-person instruction, Nulisch observed teachers using their Clear Touch panels and webcams to interact with students on a daily basis.

“We started the year in the middle of August, and all instruction was virtual. It was amazing to see how Clear Touch has been the focal point of communication between teachers and students. When our teachers came back to campus, they were teaching from their classrooms and using a Clear Touch panel with the webcam. We even have a teacher who is still teaching virtually while the kids are coming on campus, but she’s able to connect remotely to the Clear Touch and use it with ease.”

From her first conversation with the Clear Touch team, Nulisch noticed something different in their business approach. It was less about the sale and more about building a relationship. Rather than delivering products and leaving the teachers to figure out the technology for themselves, Clear Touch took the time to show teachers, administrators, and IT staff how to get the most out of their panels, software, and accessories.

“We’ve had Clear Touch trainers come to our schools, and we’ve also taken advantage of the remote, online training options — which is especially helpful in a time that in-person meetings aren’t possible,” Nulisch said. She also pointed out that the company’s support has extended far beyond just showing them how to use existing hardware and applications.

When the district purchased a new Learning Management System, Clear Touch trainers worked with the instructional leaders to create a customized training module that they could implement at each campus. Recalling Clear Touch’s commitment to collaboration, Nulisch remarked, “We really feel like they are a partner. We know the trainers by name, and they know us. They know what curriculum we use, and they’ve worked with us to create a truly progressive partnership.”