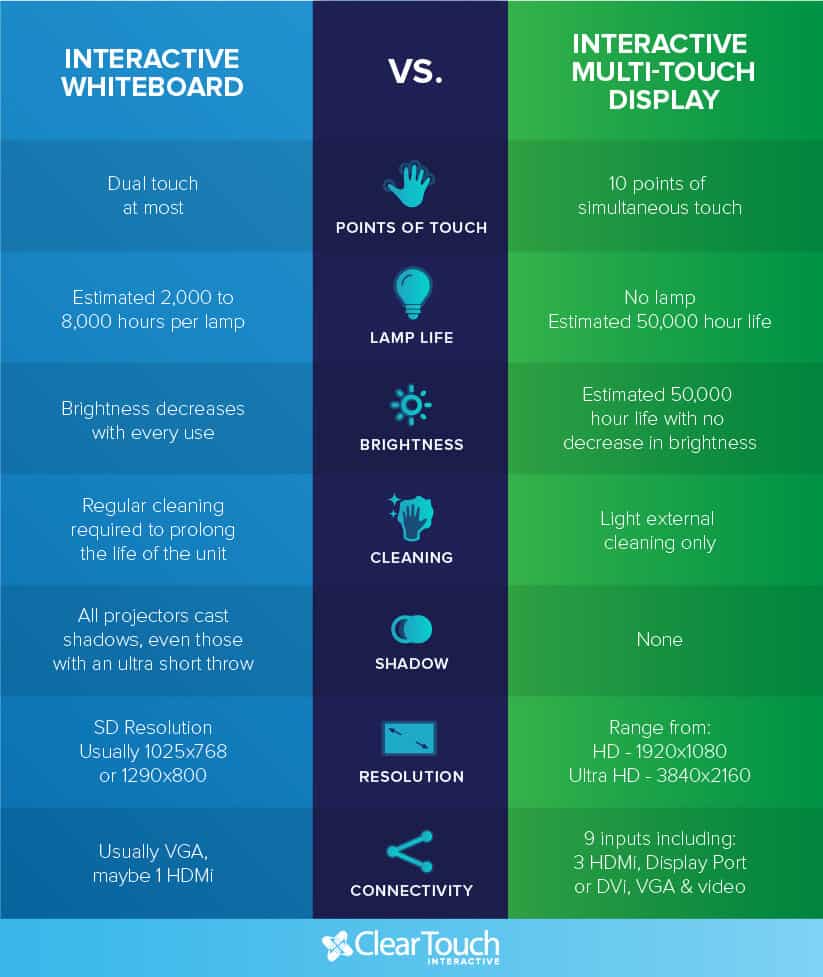 By contrast, an Interactive Multi-Touch Display is an all-in-one device that looks just like a large, flat panel TV. Users can connect multiple devices to the Interactive Display, including tablets and phones—and they can connect through multiple ports or even wirelessly!

Advantages of an Interactive Multi-Touch Display

Set-Up
The set-up time for an Interactive Whiteboard can be complicated and time-consuming. The projectors are often mounted on the ceiling, requiring a professional to install and run wiring to the projector as well as audio back to a separate audio system. As an all-in-one system, an Interactive Multi-Touch Display is much easier to set up, requiring nothing more than mounting the unit on a wall—or simply wheeling it into your room if you choose a mobile stand!

Connectivity
Devices that require multiple HDMi and Display Ports are becoming more common every day since digital inputs create better quality images and better performance. Unfortunately, most Interactive Whiteboards have only one HDMi connection if they have any at all. And, since the projector is often on the ceiling, it is difficult to reach the HDMi port, if it exists. Clear Touch Interactive Multi-Touch Displays have three HDMi inputs, 4 USB inputs and, since the speakers are integrated with the panel, the HDMi audio comes from the screen and doesn’t require a separate system.

Maintenance Time
Not only do Interactive Whiteboards need to be cleaned frequently in order to prolong the life of the projector lamp, they need to be re-calibrated often, costing valuable teaching or meeting time. Interactive Multi-Touch Displays do not need re-calibration and are virtually maintenance-free, needing only light dusting from time to time—about as frequently as you would clean your TV at home.

Multi-Touch
Interactive Whiteboards have struggled to keep pace with the direction that new collaborative software is heading. Even the most advanced Interactive Whiteboards feature two points of simultaneous touch, while collaborative software such as Windows Gestures require up to six points of touch recognition to access the full range of gestures. Clear Touch Interactive Displays have an industry-leading 10 points of simultaneous touch.

Collaboration
Of course, at Clear Touch Interactive, we care about the technical specs of our products. But we’re more concerned about the people who use our technology—and what they can do with it. Greater display power, easier installation and maintenance, multi-touch capabilities, and better connectivity all mean one thing. Better collaboration. Compared to Interactive Whiteboards, which tend to encourage passive viewing or limited participation, Interactive Multi-Touch Displays encourage true interactivity, small group collaboration, and active learning.