“Toward the end of the school year, when all the spare projector bulbs are gone and we can’t buy more because the budget for the year is running low, teachers just have to make do,” said Lechel Pitts, media specialist at Fairfield Middle School. “We don’t run into that problem with the Clear Touch panels. They’re always bright and vivid and don’t require any expensive replacement bulbs.”

Fairfield County School District in South Carolina is in the process of replacing its outdated whiteboards and projectors with multi-touch flatscreen panels from Clear Touch Interactive. Fairfield Middle School received 11 of the 37 panels deployed throughout the district prior to the 2015-2016 school year. 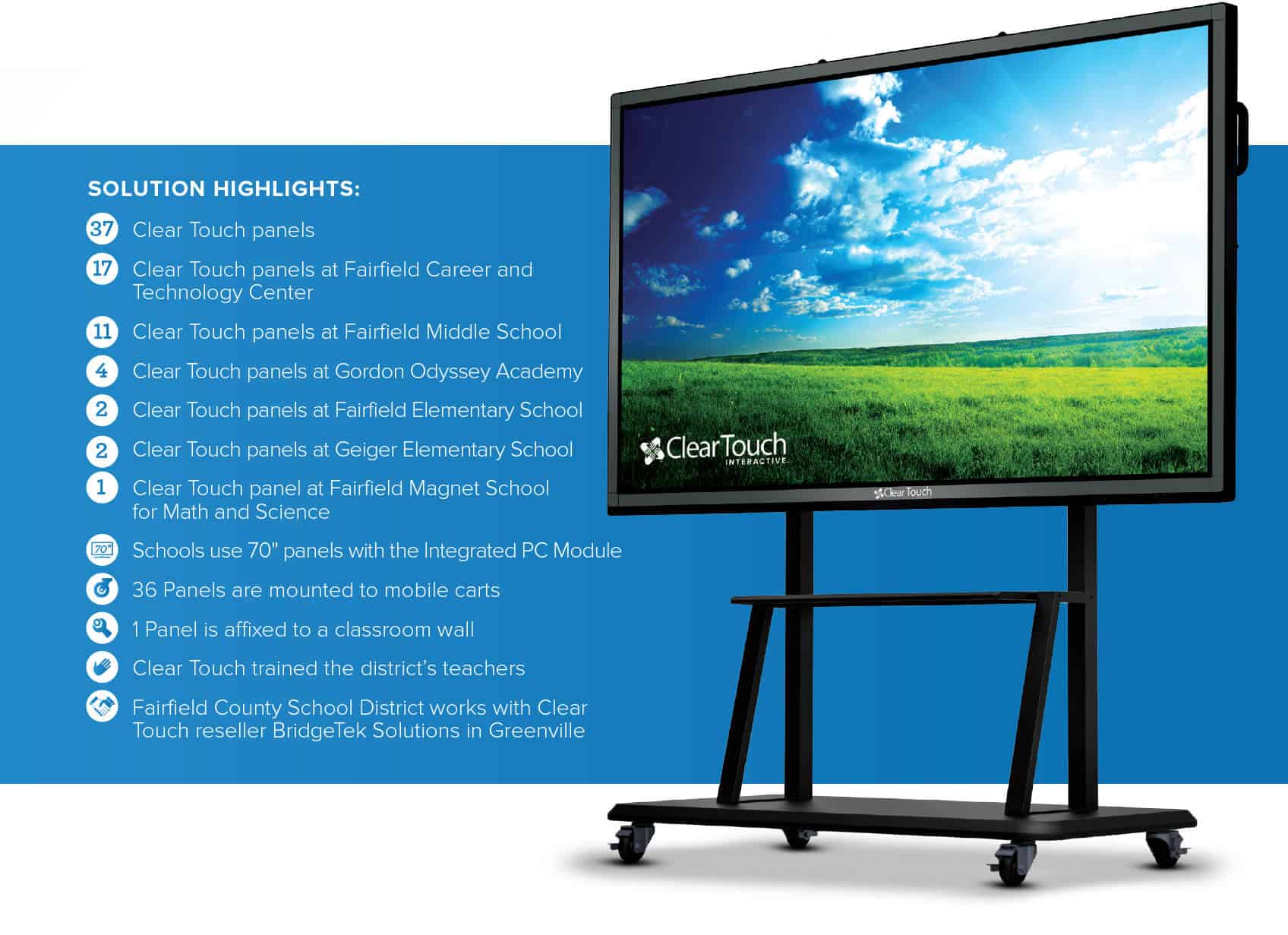 Seventeen panels went into a brand new facility housing the Fairfield Career and Technology Center, now located adjacent to Fairfield Central High School. The FCTC enables students—primarily high schoolers— to take vocational and technology classes and pursue certificates in a variety of disciplines, including automotive repair, culinary arts and graphic communications, among others.

“Since it was a new building, we had the opportunity to install new technology in every classroom. It’s the only place where we weren’t replacing projectors and whiteboards,” said John James, director of information technology for the district, who has overseen the implementation of the new Clear Touch panels.

Each of the other 20 panels deployed throughout the district represents a significant upgrade. “We had whiteboards and projectors everywhere, and one by one, they started dying,” said James. “We had to constantly calibrate the boards, and the projector bulbs kept burning out. It was time to do something.”

James credits Pitts with bringing the panels to the school district’s attention and advocating for them. “Once she showed everyone what the Clear Touch panels could do, we knew that was the direction we wanted to go,” he said.

In addition to replacing old technologies, James says the panels complement other district technologies that have remained in use alongside the panels—Chromebooks, for example. Several years ago, Fairfield County School District rolled out a 1:1 learning technology program. Each student in grades three through twelve, as well as all district teachers, now has a Google Chromebook.

“For a smaller district—roughly 3,000 students—we have some fairly advanced technologies,” said James, who also noted that the district’s Internet backbone and Wi-Fi were recently upgraded and extensive work was done on the network infrastructure. “Just looking at the Clear Touch panels, you know they’re high-tech. Nobody sees the cabling and server components, but those parts of the network play an important role in supporting all the great devices we have.”

Clear Touch panels accommodate the district’s devices with ease. “When you plug a device into any of the three HDMI ports, it immediately switches to that device. You don’t need the remote to switch inputs,” said James. “Simply plug in a cable and the panel instantly becomes a 70” Chromebook or an Apple TV screen, for instance. With projectors, there’s so much setup involved.”

All but one of the 70” panels are mounted to mobile carts, and multiple Clear Touch panels can be linked together. “We like the flexibility, and the fact that they’re portable increases the ways in which we can use them,” said James.

Pitts agrees. “Connecting external devices is so easy, and the panels are very versatile. When we gather large audiences for assemblies and performances, we wheel multiple panels into the gym and hook them together,” she said.

In the FCTC, webcams are often hooked up to panels and used to display hard-to-see objects and peer inside small spaces. In the automotive lab, instructors point webcams inside engines, and in culinary classes, inside pots on stovetops.

Building a Culture of Collaboration

In everyday classroom use, it’s the panels’ multi-touch capability that makes it the clear winner with students. Clear Touch panels support an impressive ten simultaneous points of touch, which drives powerful collaboration.

It’s also easy for students to see and hear the panels. The sound quality is great, and because each panel features an HD LED display that produces brilliant colors on a 4mm anti-glare, anti-friction tempered glass surface, it’s never necessary to dim the lights or close the blinds when using a Clear Touch panel.

Snowflake MultiTeach is an edutainment suite of apps for touchscreens used by teachers and students in K-12 classrooms. It makes learning fun and creates memorable interactive experiences through more than 25 built-in apps with preset content. Busy teachers can also use the Lessons app to quickly and easily create curriculum-specific touchscreen lessons with their own custom content.

Clear Touch provided onsite training for teachers, though Pitts believes it may have been unnecessary. “We didn’t really need training,” she said. “The panels are so easy to use. Even guest speakers who have come into the school to give presentations have been able to use the panels with no training whatsoever.”

James said support issues are virtually nonexistent. “Of my last 300 support tickets, 20 percent were projector-related. Zero percent were panel-related,” he said, also noting that there haven’t been any problems with the PCs they elected to integrate into each panel. “In fact, any time someone opens a ticket about a panel, I get excited because it’s usually a request for us to check out some cool new app and install it on the panels, and that means I get to play on the panels.”

Pitts also mentioned the panels handle upgrades well. “We did a pre-upgrade to Windows 10 on the integrated PCs and didn’t have a single issue,” she said.

Clear Touch Interactive panels will eventually be found in each of the nearly 300 classrooms in the district. “Our superintendent, our board of trustees, our teachers, our students … everyone loves the Clear Touch panels. It’s just a matter of time before they’re everywhere in the district,” said James.