When Colquitt County High School opened its doors in Moultrie, Georgia, in August 2015, it was said to be the largest high school between Macon and the Florida line—and it’s easy to see why. The facility is located on 47 acres and includes six buildings, totaling 364,000 square feet, surrounding a 1.5-acre amphitheater courtyard. Construction of the new $45.5 million school was funded by a special purpose tax levy for capital outlay projects.

From the modern-day media center and vocational labs, to the massive 2,500-seat gymnasium, to four floors of bright, beautiful classrooms, it’s clear to see that the new school was designed with a vision of fully immersing 1,700 students in their high school experience and engaging them in their education. Clear Touch Interactive panels installed in every classroom, and those used by coaches, are an integral part of delivering on that vision. 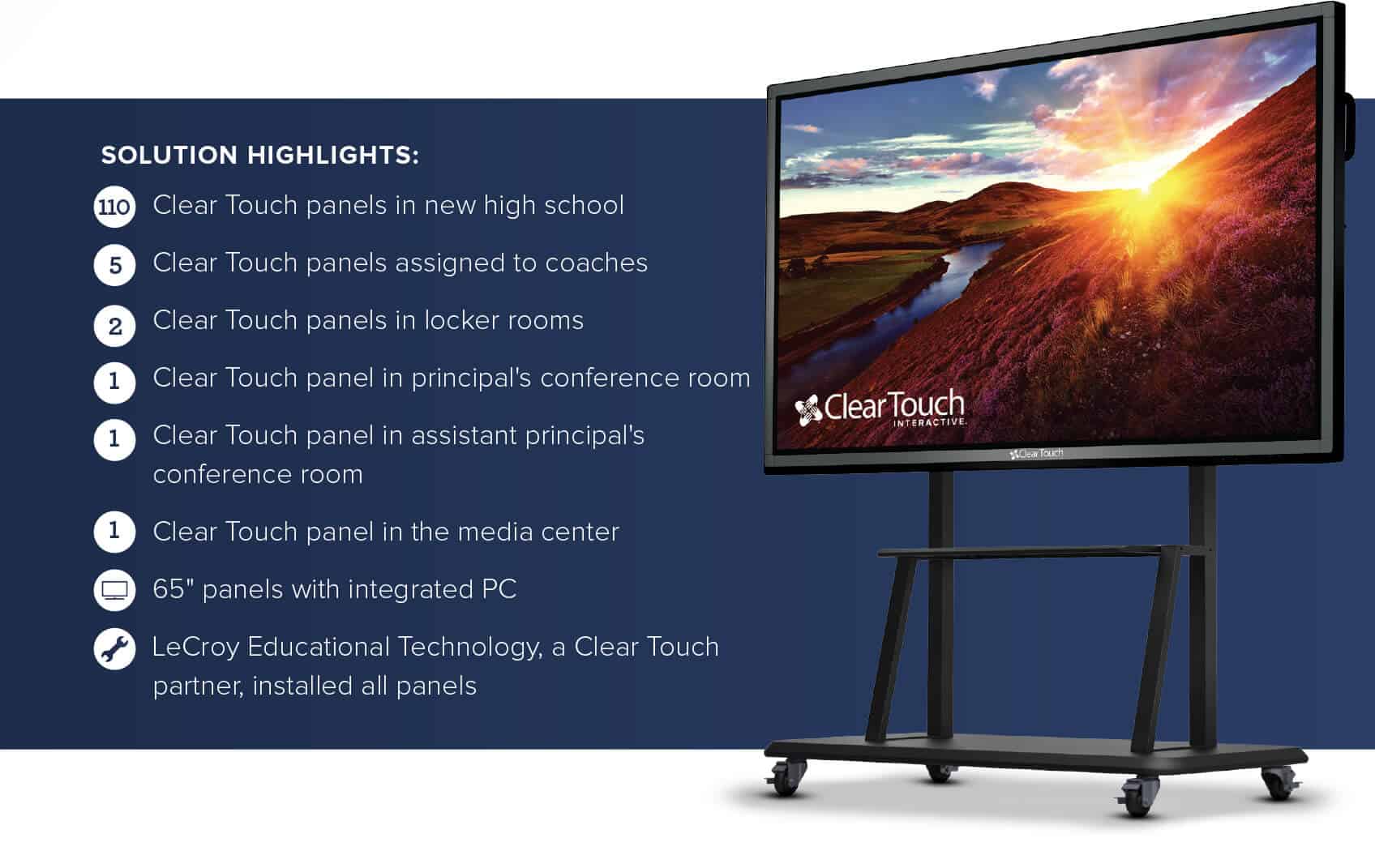 Not all of the teachers initially wanted the panels. “When the math department came to our selection meeting, they balked at the idea of installing this type of technology. They wanted traditional dry-erase whiteboards like they were used to,” said Nichols. The math teachers wrote problems on their whiteboards, then took photos of the problems and shared them on their websites for students’ reference outside the classroom. “It was the way they had been doing it for years, and they had difficulty envisioning how to do it any other way.”

“But once we showed them how Clear Touch panels provide never-ending whiteboard space, instant capture and share functions, our math teachers were hooked. In fact, they became our biggest Clear Touch champions,” said Nichols. “Now, when other districts come to look at the panels, I take them to a math teacher who basically went from nothing to an interactive panel, and can vouch for the gains in instructional value.”

Clear Touch’s flatscreen panels were considered alongside other technologies. Nichols said the old CCHS had a few interactive whiteboards, but most classrooms had whiteboards and projectors. “We dipped our toes in the water but didn’t have any one solution, and certainly not one in every classroom,” she said. During the selection process, multiple vendors came in to demonstrate their products. Clear Touch was the clear winner.

“It was a combination of three things,” explained Nichols. “Clear Touch’s software was as robust as what we had seen in the interactive whiteboards. Their price-point was reasonable and better than the competition. And they really touted a nice warranty and product durability.”

Clear Touch panels are made with HD LED displays that produce brilliant colors on a 4mm anti-glare, anti-friction tempered glass surface—so they stand up well to everyday use. The panels are vivid and bright, even when the sunlight is streaming through the new CCHS classroom windows. There’s no need to ever close the blinds or turn off the lights with Clear Touch panels.

“There are no expensive consumables, like the projector bulbs we have to keep stocked for other schools in the district, and in the first year of use, we have had no problems with the Clear Touch panels,” said Nichols. “We have done some routine maintenance and updates to them, but none have become faulty or damaged.”

“They had to meet a very aggressive timeline because we ended up with only a small window of time between the occupancy permits being issued and the beginning of the school year,” said Nichols.

There are 110 65” Clear Touch panels currently in use at CCHS, and each panel contains the optional integrated computer module, which slides directly into the back of the panel and is connected wirelessly to the school’s network. For the 100 panels installed in CCHS classrooms, wall-mounting hardware that provides a clean look was used on the wall. Of the remaining 10 panels, some are mounted to walls and some sit on mobile stands.

“We wanted to keep our new high school free from cables and conduit. We accomplished that by creating a wireless network and implementing Clear Touch panels with integrated PCs that extend the power and versatility of teachers’ existing workstations,” said Nichols, who believes a panel’s real power is unleashed when used as a student workstation. “These panels get students out of their seats and support kinesthetic learning.”

Because Clear Touch panels are software agnostic, the possibilities are endless. CCHS teachers can pull up any Windows-based application, any iPad app, any video, any website, etc., and display it on their Clear Touch panel. The panels also come with powerful Clear Touch software, like EasiNote, which is used for drawing, annotating and writing on existing presentations, photos and videos as well as built-in background images.

In addition, many CCHS teachers utilize Clear Touch’s EasiConnect software to seamlessly connect mobile devices and tablets (including student devices) to the panel, and EasiCapture to capture and share recordings of their lessons. “EasiCapture is what the math teachers use now. It has replaced that old process of writing with dry-erase markers, and taking and uploading photos. The math department loves EasiCapture,” said Nichols.

Using Panels Outside the Classroom

Ten of the Clear Touch panels on the new CCHS campus can be found outside classroom walls. One panel is housed in the media center’s computer lab, which features two dozen individual computer workstations. One can be found in Principal Stephanie Terrell’s conference room and another in a conference room shared by the school’s assistant principals. These panels come in handy during administrative meetings and planning sessions.

The remaining seven panels are used by PE teachers and coaches.

There is a Clear Touch panel installed in each of the two locker rooms, and the football, wrestling, baseball and two basketball coaches all have a panel.

From the state-of-the-art design of the newly built facility to the innovative ways in which students, faculty and coaches are tapping into the power of the Clear Touch panels, CCHS has certainly succeeded in creating an educational environment that enhances student learning in the classroom and beyond.